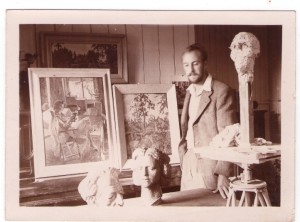 Alan Gilderdale’s career divides itself between the first twenty years working professionally in England, and the following forty in New Zealand. His early career saw him regarded as a promising young English artist. After studying at the Slade between 1942-8, during the 1950’s he exhibited with the London Group, the National Society of Artists and Reigate Artists. For most of this period he taught part-time at St Martin’s School of Art, but his output reduced after a similar job at Reigate School of Art became full time. Working within a limited palette, his English works engaged with landscape and figures in increasingly abstracted ways. Little of his English output remains, however, owing to the limits on what could be transported to New Zealand on an assisted passage. The surplus was burned. After he moved to New Zealand, in 1969 Gilderdale took a break from teaching and had a whole year devoted to painting. This allowed him to totally remake his art, responding to the new culture, light and environment, and moving to almost complete abstraction. This activity resulted in a one-man show at Auckland’s New Vision gallery. 1970 was not, however the ideal time for unveiling work from a newly arrived British artist. New Zealand was looking to its own, and the show elicited a muted response.

Gilderdale returned to full-time tertiary teaching for the next few years, and it was not until he went part-time again in the late 1970’s that he was able to regather his momentum. A year in England in 1975, with visits to France and Italy meant he encountered contemporary European artists like Manessier and Alechinsky. The next few years were a period during which he reconciled his New Zealand abstraction with these new impulses, and what emerged was a strongly symbolic set of works that incorporated his interest in the ideas of Jung. Colour became increasingly vibrant, and figurative and narrative elements re-emerged, but usually in ways which required the reader to interpret them via their own experience. During the eighties and nineties he exhibited regularly, mostly at Auckland’s New Vision and ASA galleries, to increasingly positive reviews. However his painterly works seemed ‘unfashionable’. A seventy year-old, male, British painter with no skill at self-promotion was hardly the most marketable commodity in the brash new world of the nineteen nineties Auckland art scene. Over his final years, it was his work as a book illustrator that brought him national recognition, with the Little Yellow Digger series having sold over 400,000 copies. These books each took six months to complete, and they disrupted the momentum of his painting. After his 1996 Gilgamesh show, he did not exhibit further work, though he continued painting.

Gilderdale’s innate modesty meant he was unwilling to put on a retrospective during his lifetime. However 2015 saw a large-scale retrospective across all five galleries at Northart, curated by Warwick Brown, who recognised that the lack of recognition of Gilderdale’s contribution was a serious oversight. This website aims to expand on that show and to provide more material that can allow a critical re-evaluation of Gilderdale’s work to take place. The material in this section aims to provide background context for the work, with a fuller biography, critical responses, and a full CV that document Gilderdale’s substantial output. The news section will update additions to this website, as well as comment and further exhibitions as they occur.